The European Green Deal is a response to growing customer needs as well as the growing concern about the environment and the fight against climate change. This is a continuation of previous activities carried out under the Common Agricultural Policy and the Rural Development Programme[1] – for years the European Union has been supporting not only ethical animal production but also reduction of the environmental impact of livestock farming, agriculture and food production. It is worth checking what new solutions the EU is introducing – history has already shown that pioneering changes introduced on the Old Continent influence consumer choices worldwide.

In times of climate and environmental change, biodiversity is becoming increasingly important. Animal production no longer serves only to provide food, but also has very important environmental and nature-related functions – the European Green Deal aims to increase biodiversity by developing local breeds and protecting unique genetic resources. There are entire ecosystems in Europe that are heavily dependent on cattle production and pig grazing. An example is oak forests in southern Europe, where, within the concept of agroforestry, pigs feed naturally on oak leaves and fruit, thereby conserving the natural landscape[3]. Biodiversity also has a number of culinary benefits – the richness of breeds and varieties of livestock, combined with multiple rearing methods, leads to a truly multicoloured palette of flavours found throughout the European Union – after all, a maturing ham from Hungarian Magnalica will taste different from Croatian Pršut, Italian salami or Jamon Iberico from Spanish pigs, even though all these products are based on pork meat.

Another important point is short supply chains – an attempt to make the route between the food producer and the consumer as short and uninterrupted as possible[4]. Short chains offer two main advantages: reducing greenhouse gas emissions and improving the quality and safety of the food supplied[5]. The European Union is aiming to reduce the route between the crop being harvested from the field and its application in animal feed, which, together with an increase in crop diversity thanks to biodiversity programmes, translates into better feed quality. Better quality feed means better meat, which consumers will appreciate. The importance of short supply chains can be seen, in particular, in beef, which is rated much better if it comes from cattle fed on local feed[6]. In addition to livestock production, short chains have a major impact on processing, as the distance and time between the farm and the final processor is very short, which strongly contributes to the quality of the products.

Environmental protection, particularly with regard to plant fertilisation and reduction in use of antibiotics, are other important elements of meat production and animal husbandry in relation to the Green Deal. Under the Farm to Fork policy, it is planned to reduce the amount of fertilisers by 20%, the amount of pesticides by half and to reduce antibiotics used in livestock farming by 50%. It will further reduce the already low consumption of antibiotics and additional substances. This is taking place in line with consumer preferences – according to some studies, Americans are willing to pay significantly more for products made without such substances[7]. Moreover, more natural nutrition means tastier meat – so both the environment and the consumer benefit.

In conclusion, the European Green Deal will make meat production in Europe even more environmentally friendly in the coming years. Further increases in biodiversity and reductions in greenhouse gas emissions and environmental impact are a response to new consumer needs. As a result of the changes introduced, more and more consumers will be aware that purchasing meat products from the EU is a good choice, not only from a culinary, but also from an environmental point of view. 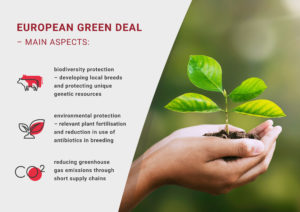