The destabilisation of biodiversity entails numerous risks, the consequences of which we cannot foresee. This is because organisms, in the process of evolution, have adapted to the conditions in which they live, forming a complex network of relationships. We never know whether the loss of one piece of this puzzle will disrupt a system that has evolved over millions of years[1]. The causes that lead to biodiversity loss are complex and mainly man-made. These include land use change through deforestation and increasing urbanisation, direct exploitation through hunting and overfishing, climate change and waste pollution[2]. Awareness of this problem makes the citizens of the European Union care about our common good – the natural environment.

Biodiversity is a major factor in stabilising the functioning of ecosystems. A general definition of biodiversity is the diversity of life at all levels of its organisation, encompassing the variation of genes, species and ecosystems. Biodiversity consists of species richness (i.e. the number of species) and the proportions in which they occur. The more even the ratio, the richer the biocenosis[3].

The European Union has not been passive in the face of this ecological imbalance. To combat these advanceing processes, it has implemented a number of strategies to regenerate biodiversity. New directions and priorities in this field are set by the European Biodiversity Strategy 2030, announced on 20 May 2020. The aim of this ambitious initiative is to set the European society on a path of conservation and regeneration of nature over the next decade. Collaboration between political, scientific, business and social spaces will take place at local, regional, national, European and global levels. In particular, several policies included in the strategy are worth noting: Biodiversity, Eliminating pollution, Farm to fork, Sustainable agriculture, Clean energy[4].

One of the biological objectives of the new strategy is to restore degraded ecosystems on land and at sea by increasing production in the organic farming system and increasing the number of nature-friendly elements in the agricultural landscape. In numerical terms, this includes halting and reversing the decline in pollinator populations, reducing pesticide use and risks associated with them by 50% by 2030, restoring at least 25,000 km of Europe’s rivers through free-flow restoration, and planting 3 billion trees. The EU also places great emphasis on the economic sphere by launching a special fund for the protection of biodiversity. This includes unlocking €20 billion a year for biodiversity from various sources, including EU funds and national and private funds[5].

The Committee on the Environment, Public Health and Food Safety points out in its report that the monoculture practised in many parts of the world may lead to a loss of biodiversity, and the European Commission should take action in this regard[6]. A great deal of attention is also given to a variety of animal husbandry. Member States are urged to continue to maintain high levels of funding for the conservation of endangered breeds[7]. It is worth emphasising that the European Union has, for many years, applied strategies through which agriculture actively supports biodiversity. Many EU countries have cattle grazing programmes in places that have been an integral part of the ecosystem for centuries. Livestock in many places, particularly in mountainous areas, are responsible for spreading plant species and stabilising the ecosystem. Another important element will be a new forestry strategy for forests and the forest-wood sector. Its main objectives are to expand woodlands, the place where biodiversity can flourish the most, providing a home for thousands of plant and animal species. There are also special programmes to promote crops that keep wild birds safe[8].

The European Union is working hard to improve biodiversity within its territory and, at the same time, is setting a conscious example to the rest of the world of the importance of biodiversity for the entire ecosystem and for food production. 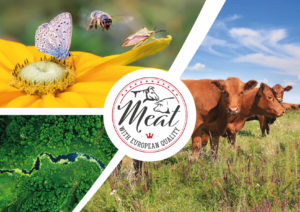