The animal welfare is more and  more important factor affecting both the quality of meat products and consumer decisions. The majority of surveys indicate that more than two thirds of Americans claim that the standards of keeping animals and conditions in which they are reared are important for them as they pick the meat from the store shelf[1][2][3]. As such, there is a need for continuous improvement of standards and creation of new solutions related to the increased welfare of both people and animals. Therefore, the European Union has for a long time been introducing minimum requirements and standards related to animal production; in addition, EU rewards farmers who voluntarily participate in such systems of increased  animal welfare. These are the programs in which the European farmers should comply with requirements that are significantly stricter than the mandatory ones and, in turn, they get higher prices or additional support from the European Union. Many EU states pioneer in this field, such as Denmark, Poland, Germany or France, as each of them has its own national system of increased welfare.

One of the largest pork suppliers from the European Union to America is Poland, which has its own solutions for the increased animal welfare. These systems are, above all else, aimed at improving the quality of the infrastructure and the environment where the pigs are kept. Farmers are entitled to additional payments if they keep pigs in a system where there is at least 20% more surface per one animal in comparison to the standard requirements[4]. Similarly, the requirement that the surface is larger applies to the gestation sows kept in groups[5]. Furthermore, the sows must be provided with more freedom of movement, which means that they are not kept in individual stalls, except for 8 days during the perinatal period[6]. The fatteners taking part in the increased welfare program must originate only from sows kept in this program. Additionally, fatteners from the program might be sold with maximum one middleman, in order to shorten the supply chains[7]. According to the Polish Ministry of Agriculture and Rural Development, as many as several dozen manufacturers applied and may use the support.[8][9]

Denmark is the second, after Poland, supplier of pork to America and also has its own solutions for the welfare of animals, referred to as QSG and Danish Product Standard[10]. These systems are not restricted to increased welfare only, but also provide the highest quality of meat at the processing stage[11]. Within the framework of QSG, the piglets have access to natural enriching materials, allowing them to satisfy their need for rooting, whereas castration is carried out only under anaesthesia. Larger animals have access to enhanced infrastructure, as the animals whose weight exceeds 20 kg must have access to showers and water curtains in order to adjust their body temperature, whereas the floors are made of proper materials and all the sows should be group-housed. Not only in Denmark but, according to the applicable standards, in all the member states of the European Union, the sows are obligatory group-housed from the 4th week after mating until the week before farrowing[12]. The Danish program also puts greater emphasis on the total resignation from the stalls. In 2007 as many as 15% of the pigs in Denmark were in the QSG system[13], whereas the standard itself has enjoyed popularity to date and is gaining recognition outside of Denmark[14]. The QSG system was established in 1995, whereas the Danish Product Standard (DPS) has been in force since 2007[15]. The latter is based on a series of requirements, such as the limitation of specific products in feed, use of special needles to apply pharmaceuticals[16] or very restrictive limitations as regards to the use of antibiotics and drugs in the livestock treatment[17]. The buildings in which the pigs are kept must be adjusted in terms of proper lighting, cleanliness and air exchanging, whereas the sows must have sufficient surface, additionally equipped with the proper type of straw bedding. Manufacturers in this system are subject to regular inspections and trainings.

The European Union not only makes sure that high production standards are observed but also introduces new voluntary solutions related to ethical animal rearing. These activities are very often accompanied by experts opinions aimed at the economic and social verification of the standards being implemented. As a result, the European Union manufactures not only top-quality meat products, but also introduces new solutions and technologies whose purpose is to improve the welfare of livestock and limited impact of animal production on the environment. 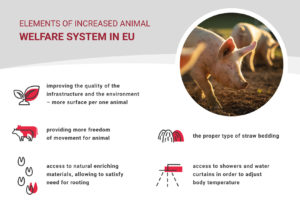