The European Union is one of the first[4] to ban the use of antibiotics in feed to stimulate livestock gain, even though it is common practice in many other countries. Such additives were discontinued pursuant to European Commission Regulation 1831/2003.[5]

Effective veterinary control and honest cooperation between farmers and veterinarians are important factors in reducing excessive use of antibiotics. This is particularly evident in the Netherlands and Denmark, where the use of these substances for treatment and prevention of animal diseases has been severely restricted to a specialised and authorised group of people.[7] A good relationship between the farmer and the veterinarian ensures that the best possible production decisions are made, while veterinary control guarantees the proper use of medicines.

The combination of these factors has resulted in an antibiotic use reduction in the EU, a process that has been going on for more than a decade. Antibiotic use for veterinary purposes in the European Union decreased by more than 32% between 2011 and 2017.[9] The new regulations will ensure that this trend continues. The issue of the use of antibiotics in meat production is also becoming increasingly important on the other side of the Atlantic. According to some studies, as many as 72% of Americans take this aspect into account when shopping, and as many as 37% of shoppers are willing to pay up to a dollar more for a pound of meat produced without the use of antibiotics.[10] The answer to these needs is the European Green Deal, which offers a number of solutions that benefit the environment and consumers’ lifestyles. 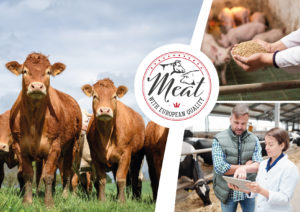