Kabanos is a delicious, long and dry sausage that originates from the Central/Eastern European region.  It is also one of the thinner and tastier sausages originating from Europe. The concept of the kabanos itself has a long history, from a festive delicacy in the eastern part of the EU to a popular convenience product throughout Europe. Despite its many modern applications, the product has a long tradition and a protected recipe – in order to protect the original character of this type of sausage, kabanos was entered in the EU Register of Protected Designations of Origin, Protected Geographical Indications and Traditional Specialities Guaranteed as a Traditional Speciality Guaranteed.[1] 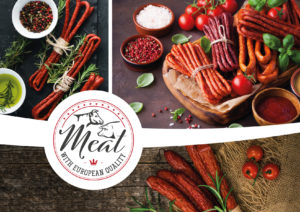 The name kabanos comes from the word kaban.[2] In the 19th century, this term was used in Poland to denote a specific type of pig – a male hog extensively fed on potatoes and other plants. Thanks to this type of feed, kaban meat was of high quality. Kabanos became particularly popular in the inter-war period.[3] With economic development, more and more different variations on the kabanos were being created. During this period, a long, thin, dried and smoked sausage in sheep intestines became a popular variation, but in addition to the well-known recipe there were a number of other, less widespread recipes containing various spices, additives or smoking methods. Kabanos sausages have always had a few things in common – dryness, thin shape, high palatability and the characteristic crackle, also sometimes called the snap, which occurs when the sausage is broken. This sound comes from the tenderness of the meat and the high degree of dryness, resulting in the sausage having a very hard, compact and uniform texture.

As the region developed commercially and economically, kabanos became increasingly popular. Its career officially began in the second half of the 20th century, when the product was standardised on the basis of traditional recipes.[4] Even then, the standards adopted were very restrictive as regards the use of additives that are considered undesirable today, so the recipe for ‘kabanos’ has not changed significantly over the years.[5] To this day, there are large meat companies in the EU, including Poland, which specialise in the production of kabanos. With the opening of the borders in the 1990s and the growing emigration, kabanos began to be recognised throughout Europe.

There are three main factors behind today’s recognition of kabanos – high quality, ease of storage and speed of preparation.

High quality has always been a feature of kabanos – the product itself is characterised by a large amount of meat, often more than 150 grams used per 100 grams of the final product[6] – kabanos today is one of few categories where you can always be sure that the product consists exclusively of meat and the right seasoning. Accordingly, there are no unnecessary fillers or undesirable ingredients such as excess salt or aromatic hydrocarbons in kabanos, because if these were added, kabanos would lose its characteristic crackle, its low fat content and its long shelf life. [7]

Thanks to the traditional ways in which kabanos sausages are produced, these products can be stored for a very long time without losing quality, taste or smell.[8] The traditional method of drying and smoking means that kabanos can be kept outside the fridge for quite a long time[9], just as it was over 100 years ago. This is one of the great things about kabanos today – these thin sausages are the perfect snack for holidays, going out on a picnic or partying with friends. In Central and Eastern Europe, there is a strong tradition of taking this type of meat product with you on your travels. As a result, there is a whole range of kabanos in different packs available in the shops – from a snack for one person to a whole pack for trips for several people. Its good composition and high proportion of protein means that even a few bites can satisfy hunger.

Quick preparation – no need for heat treatment or even cutting into smaller pieces makes kabanos an easy snack, gift or quick dish for a party.[10] Unannounced guests or a lack of time to prepare lunch are good reasons to reach for kabanos. As much as 40% of kabanos bought in Poland, the country known for this product, is bought in small packs designed for such occasions.[11]

Kabanos is a great convenience product – good composition, high quality, long shelf life and ease of preparation make kabanos one of the best meat snacks you can reach for anytime, anywhere. It is worth checking if the product is genuine kabanos – just look for the TSG mark on the packaging.[12]