In America, barbecue is not just a form of meal preparation – it is also a highly valued form of entertainment, part of the culture, and, for some, even a life-long culinary philosophy. In many American movies, you can see a proud father standing in an apron at the barbecue, preparing loads of burgers, ribs, or steaks to celebrate July 4th. In the US and Canada, a barbecue is an occasion for a party centered around grilled meat, and if it plays first fiddle, it must be of high quality.

BBQ can be called a national passion in the United States and Canada alike. The love for this type of food preparation emerged in the 1920s and was popular among the lower classes[1]. Preparing food outdoors using wood and coal was cheaper than cooking at home. It was not until the 1950s that attitudes toward barbecues began to change, and people saw it as an excellent opportunity for integration and family gatherings in the open air.

BBQ is governed by its own laws and certain inviolable rules to follow. The first is, of course, the choice of meat. Ribs, burgers, wings, beef briskets, chops, and all kinds of jerked beef and pork sealed between two buns have dominion over the US. The main aim is to find the happy medium in the meat’s texture, seasoning, and juiciness, but even the best BBQ master is not up to the task if the product is of poor quality. This is why European meat, whose production is controlled from the earliest stage of making the feed to packaging and putting it on the shelves, will ideally find itself on the BBQs during business team-building meetings or summer family celebrations.

The second issue is choosing the suitable wood: beef or pork should be grilled on heavy wood such as oak, walnut, or hickory. The thick smoke then soaks into the meat’s structure, and the more intense embers last longer, allowing the meat to cook at the right temperature. As a result, the meat is aromatic and juicy. Unfortunately, a poor-quality product can spoil the effect of even the most meticulously prepared dish. When it comes to shopping, it is better to choose a product of known origin and proven high quality so that the result is melt-in-the-mouth food.

The third piece of the puzzle is the sauce, which not only acts as an enrichment for the already finished dish but also as a marinade and glaze. This is why so much attention should be paid to juicy, suitable meat – its quality influences the absorption of spices, giving variants of barbecue best-sellers the right texture and a full-bodied flavor. Certified European beef and pork are up to the challenge.

The meat should spend enough time on the grill at a relatively low temperature to keep it juicy and tender. However, poor-quality meat is easy to dry out or make tough. BBQ chefs must therefore be patient. For example, competitions are held throughout the country, in which participants – both professionals and amateurs – compete in preparing the most delicious grilled dish. It often takes all night. To compete with the best and get the best possible result, you need to choose quality products such as European meat. The result is a dish so delicate it melts in your mouth.

Barbecue season in the United States begins with the end of May and peaks on Independence Day in early July. With temperatures dropping in the fall, you’re leaving your grill outside the window or bringing it into the garage so it can wait out the next few months of glory in peace. By this time, garden party enthusiasts have a chance to yearn for the smoky aroma of succulent ribs. Fortunately, the season for quality European pork and beef lasts year-round, and you don’t have to say goodbye to them. 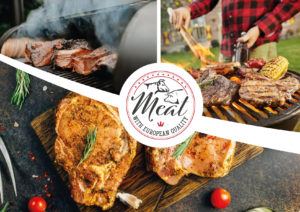