The European Green Deal is a landmark strategy that not only revolutionises the approach to closed-circuit economy, but also aims to facilitate the development of future generations. This plan is a continuation of the Common Agricultural Policy, which has supported ethical production and environmental protection on farms throughout the European Union for several decades. The Green Deal brings new quality and a strong impulse that will translate into the development of new production and environmental standards around the world.

Climate change and environmental degradation are an increasingly frequent topic of public discussion. The European Union has been a pioneer in new climate solutions for years, protecting not only its own environment, but that of the entire world. The Green Deal will make the European economy even more competitive, modern, resource-efficient and greener. The end result of this policy is to decouple economic growth from resource use and to achieve net zero GHG emissions by 2050[1]. The European Commission wants to achieve these results by using new technologies and innovative solutions. At least 35% of the value of Horizon 2020, one of the most important research programmes in Europe, is to be allocated to finding new solutions for nature and climate protection[2].

Europe’s climate and environment are intrinsically linked to agriculture and environmental protection – since almost 25% of the EU’s land is farmland[3]. The budget allocated to the Common Agricultural Policy accounts for almost 40% of the Union’s total expenditure and constitutes the largest part of it[4]. This is the best evidence of how much attention is paid in the EU to food production, environmental protection and socially responsible agriculture.

The Green Deal aims to limit environmental interference in all aspects of production on an unprecedented scale. The future of the agricultural sector under the Green Deal is regulated by the “From Farm to Fork” strategy. Its’ key elements are:

Modern European agriculture can achieve these ambitious objectives with the help of effective tools under the Common Agricultural Policy. As much as 40% of its budget is to be allocated to the fight against climate change[5]. From the point of view of the meat industry, the proposal to reduce the use of antibiotics in animal production by 50% is particularly important. European breeders are already successful in this field. Over the 6 years between 2011 and 2017, the use of antibiotics in EU livestock production fell by as much as 32%[6]. For comparison, the use of antibiotics for the same purposes in the United States increased by 26% between 2009 and 2015[7]. High animal welfare standards in the old continent contribute significantly to better animal immunity and thus reduced pressure caused by disease. The aspect of antibiotics is more and more important for consumers – 32% of respondents in America point out to this issue[8]. Consumer preferences may translate into increased imports of products produced in the EU in a manner ensuring the maximum possible respect for the environment. 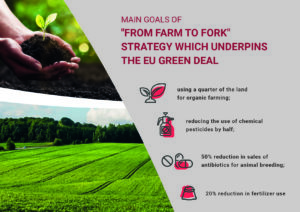 The new EU rules also aim to regulate the way food is labelled, so that buyers receive more information about the product, enabling them to make a more informed choice. This is an undoubted opportunity to draw the attention of consumers to environmentally-friendly food. As a result, this may lead to a further increase in the interest of American citizens in products from Europe, especially since as much as 35% of US consumers pay attention to the GMO content of products and 30% want to buy products free of artificial additives[9].

The EU Green Deal is a new chapter not only for European food producers, but also for citizens around the world. The decarbonisation of the economy and the enhancement of biodiversity are worthwhile ideas that provide an opportunity for consumers worldwide to make ethical choices. Other countries and regions should also follow this direction – after all, we have one common planet to look after.