Bacon is one of the most popular pork cuts in the United States. More than half of American households always have bacon in the fridge[1]. This product, like many other delicious meat products, came to America with European emigrants. The popularity of bacon in America is best shown in figures – the average U.S. citizen consumes 18 pounds of bacon annually[2]. This meat fits every dish – bacon will enrich the taste of not only green salad or breakfast with eggs, but also pizza and pasta. Due to the universal taste and ease of preparation, everyone can easily find their own way to make bacon. No wonder that for about 20 years America has been celebrating National Bacon Day every year. On this occasion, it is worthwhile to take a look at its history and to carefully trace bacons’ journey from Europe to American tables.

Bacon has accompanied humans for millennia. Already the ancient Romans appreciated this meat cut, which led to the creation of a cold cut called “petaso”.[3] Petaso was prepared from fatter cuts of pork, cooked with figs and wine. Bacon has gained in popularity over the centuries. Its modern name comes from the early Middle Ages from the French word “bako”, meaning back pork cuts. In the Middle Ages, the popular idiom “bring home the bacon” was also created, which today means providing an income for your family or achieving professional success[4]. In the old days, this phrase meant being a good husband and an exemplary citizen. This saying has its origins in the tradition of one English parish where the parishioners were rewarded by the church with a piece of bacon if they did not argue with their wife in the course of the year. The 18th century marks the start of rapid development of bacon production[5]. In 1770, the world’s first company specialising in the production and trade in bacon was established in Europe[6]. As part of the recipes developed, sugar was also used for the first time in the bacon marinating process, which gave it its characteristic brownish colour. Moreover, the end of the 18th century in Europe was the beginning of rapid genetics development and breeding pig breeds, also used for specific purposes, such as bacon pigs. 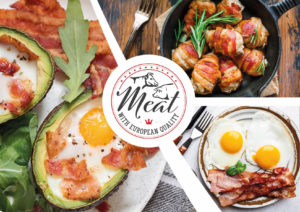 Today bacon is a popular American delicacy and one of the most important elements of an American breakfast. Bacon sold in the US alone is worth more than $5 billion a year[7]. Americans very often start their day with crispy fried bacon. According to a study conducted by YouGov[8], 93% of Americans cannot imagine a good breakfast without this meat. Interestingly, most consumers prefer bacon well done (37%) or very well done (34%). As many as 37% of all respondents indicate bacon as the main element of a perfect breakfast – however, bacon should be part of a bigger meal containing scrambled eggs (36% of respondents), toast (58% of respondents) and coffee with milk (39% of respondents)[9]. Breakfast of this type became particularly popular in the interwar period. There were two reasons for that: firstly, there were more and more articles being published in the press suggesting that people should have a much bigger meal for breakfast, such as bacon with eggs[10]; secondly, the increasing level of mechanisation and knowledge on processing facilitated production of the most recognisable form of bacon – cut and hermetically sealed slices. This product was first manufactured in 1924[11] by a company founded by a German immigrant[12]. The product was so innovative that the packaging was patented[13][14]. To ensure transparency and high quality, bacon has to be sold in transparent packaging showing the shape and structure of the meat. This ensures that every bacon strip is of good quality and meets the customer’s preferences[15]. Interestingly, the company founded by the European immigrant which popularised easy to prepare bacon was also successful in popularising hot dogs and minced meat[16].

Bacon for breakfast is a good start to the day, and good bacon based on European meat is a guarantee of lower salt[17] and preservatives content. The wide range of regional variations[18] of bacon is another reason to reach for bacon produced in Europe.