The hamburger is undoubtedly, along with hot dogs, mashed potatoes and fries, the most popular meal in America.[1] Its popularity is backed up by numbers – 86% of men in the US point  the hamburger as an iconic meal, while Americans alone consume around 50 billion burgers a year. 60% of sandwiches sold globally are hamburgers, and the Big Mac Index, which compares the price of a burger in different locations, is used to compare purchasing power in different countries. Hamburgers are hugely popular, but still many consumers do not know the roots of this dish, which go all the way back to the Old Continent. Hamburger Day, established to celebrate the hamburger’s contribution to American culinary development, offers a perfect opportunity to learn about the history of this iconic dish.

We do not know who first came up with the idea for the hamburger, but all the clues lead to Europe. One clue as to how the hamburger may have originated is the popularity of the tartare and Hamburg steak, also known as frikadelka. The name tartare, popular in France under the name “steak tartare”, dates back to the time of the Mongol invasion, when this dish came from the steppes to the area around present-day Moscow. Raw, chopped beef did not require a fire or additional preparations – some sources assume that the meat was mechanically tenderised by placing it under the saddle, thus subjecting it to shock during the gallop, which enhanced its flavour.[2] After the fall of the Mongol Empire, dishes based on minced beef formed into a round shape gained popularity among the wealthiest Russians[3], who could afford expensive meat consumption.

As time goes on, the history of the hamburger moves further and further west, through the Baltics to Germany. The Germans developed this dish by frying round beef cutlets. These dishes were often called frikadelki. The dish was particularly popular in Hamburg, one of the largest port towns, famous for its extensive trade with Russia. The name of this city gave rise to the term Hamburger, even though many people assume that the “Ham-” part refers to ham as in meat.[4] Over time, minced meat began to be grilled instead of fried and placed between two pieces of bread for eating convenience. This period coincided with increased emigration to America in the second half of the 19th century. As a major port, Hamburg was an important centre of emigration from Germany to the United States, which popularised the names of dishes referring to the city’s name.

The popularisation of minced beef was driven by economic factors – with the industrial revolution, the first large-scale machines were built to allow meat to be ground on a mass scale, and the increase in cattle production in newly-colonised areas provided a huge amount of raw material at a good price and quality.[5] By the end of the 19th century, due to the convenience of serving, hamburgers were becoming increasingly popular as food sold at various events or fairs. The history of the popularisation of the hamburger is very similar to that of the hot dog – according to some sources, once there was a shortage of pork to make sausages served with bread, so they started to serve hamburgers.[6] Just like the hot dog, this hot meat served with bread was easy to hold and consume. With time, buns matching the shape of the grilled meat began to be baked – in 1895 the first hamburger was commercially served in the shape we know today – with a round bun and extras.

Most Americans can’t imagine a hamburger without fries – these joined it later. Fries made their way to the US after the First World War, but it was in the second half of the 20th century that mechanisation of production and improved processes for storing potatoes and freezing fries allowed the iconic duo to emerge. The popularity of hamburgers and fries has particularly grown with the development of franchise chains, responsible today for the majority of hamburgers sold in America.

Anyone interested in going back to the roots and in quality meat, with an appetite for a burger that tastes different to those commonly found in fast food chains, should reach for beef from the European Union. High production standards, a clean environment and care for animals causes that good meat products can now easily travel from Europe to America, just as good recipes once did. 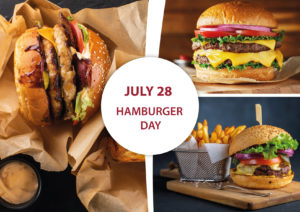